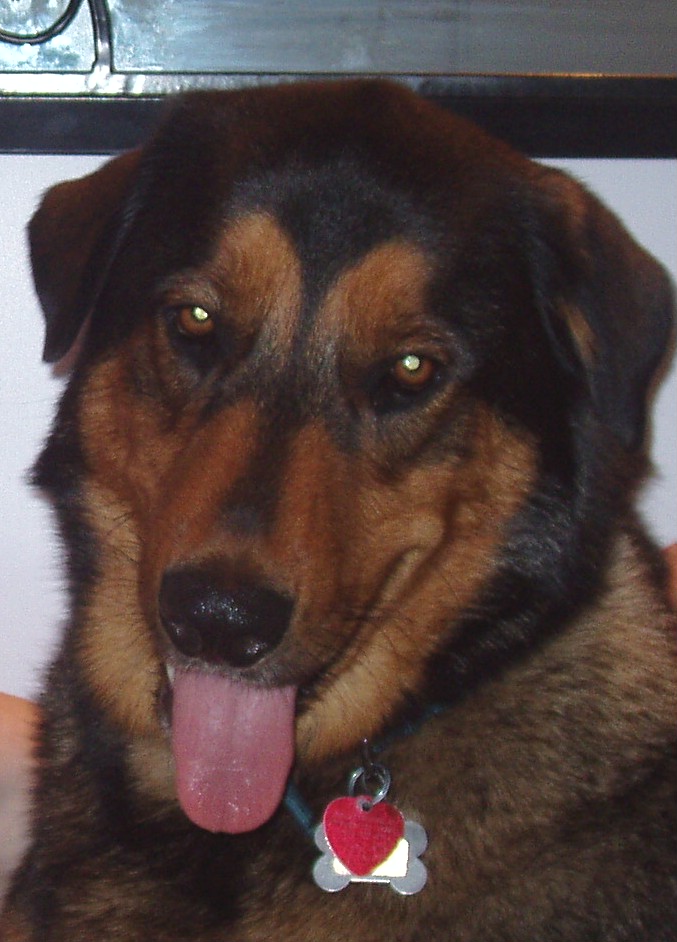 Hugo was born on November 21, 2001. Now ten years old he carries along with him a legacy of wild adventures with a bit of luck thrown in. They say cats have nine lives but this particular dog has his own story…. Let me tell you the tale about one such calamity.

Behind our house was a huge park where Hugo and I would grab the “chuck it” and toss a tennis ball hundreds of yards. A chuck it for those of you who don’t know is like an extended arm with a hand on the end. When you use this great invention the ball can carry much further than if you used your own arm. Hugo would run like a cheetah full speed, tongue dragging through the snow and chase down the ball, grab it in his mouth and bring it back to me. Now, he would not actually drop the ball but try to coax me into taking it from him. You have to understand that at eighteen months old and over 80 pounds he was not the easiest dog to grab a hold of. He would not give up the ball easily as it was his way of challenging my dominance. That particular day there was a four inch layer of snow and Hugo somehow came up with not one, not two but three balls in his mouth with snow melting in between. As the snow melted in his mouth the balls would shift and within seconds Hugo swallowed one of the balls. This led to a number of slapstick occurrences. First I tried shoving my hand down his throat… not a good idea when a dog is chocking on a ball! Then came the reflex bite. Unfortunately I still had my hand down his throat and “Yawch”… that Hurt!!! . By this time I thought Hugo he was a goner! I couldn’t lift him up so I ran back to the house for help.  Holding my hand close to my chest I started screaming at the top of my lungs “come quick, come quick”! By the time my wife ran down from the second floor I was covered with blood. She started screaming too as it looked to her like someone had shot me with a double barreled shot gun. At the same moment Hugo ran up from behind me somehow still getting enough air to breath. I ran for the car knowing Hugo would follow!

To be continued… See The Real Hugo – Part II  (About Hugo)