How Smart Is Your Dog? 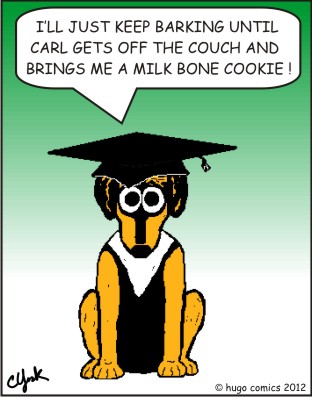 Some people say a dog has the brains of a two year old but I’m not too sure about that. Hugo has surprised me quite a few times especially with his memory. This is just one example of why I believe dogs are smarter than we think. One of the biggest problems I have with Hugo is giving him a bath. He’s just too big to fit in our bath tub and because we live in a cold country I have maybe five to six months a year where I can tie him to a tree in our back yard and take the hose to him. Luckily I have a big enough shower stall in our basement to get Hugo and myself in there comfortably and give him a good wash. The first time I took Hugo to the basement for a bath I had to coax him with a few Milk-bone cookies and although he took the bait he was very cautious. It was almost like he was thinking about it on every step he took. I’m sure somewhere inside his head he was wondering why we were giving him treats outside the usual scenario. With each piece he ate he stepped back, looked around, looked me straight in the eyes and I know he was clearly thinking about his next move. He even had the perplexed human look on his face that we often have when we’re sure something is not right. Once he came within a foot of the shower I was able to shut the bathroom door and give him a little push into the stall. I slid the door shut and now had my captive audience. Hugo gave me that look of “OK, you got me!” and just stood there silently while I scrubbed him down.

Summer passed by quickly and once again the cold weather set in. It’s now February 2012 and my wife made it perfectly clear that Hugo gets a bath or it’s me or the dog. There’s no doubt that Hugo needed a bath badly and I needed a place to live so I agreed to get the job done. “Sunday morning”! I screamed out to my wife, let’s have breakfast and then I’ll wash the dog. Sundays are pancake day at our house, which by the way is always served with real Canadian maple syrup and as usual I save Hugo half a pancake which I cut up in little pieces and mix it with his food. He sits quietly under the breakfast table until he hears the last bite as he respects the fact that I’m the alpha dog and I eat first. As soon as I put my fork down he appears with his tongue hanging just to the right of his mouth panting as if he hasn’t seen food in a month. ”Ok,” I said to myself while rubbing my hands back and forth, this is the big day! Hugo looked at me and tilted his head, he new something wasn’t kosher.  This time I grabbed a handful of bacon treats and headed down to the basement. Hugo got a whiff and quickly followed. Once downstairs I start to walk towards the bathroom. “WOOPS! What’s going on here?” I’m sure that’s exactly what Hugo was thinking. Once again he looked straight into my eyes and I swear he was about to say “Oh no, not this time!” There’s no way he was coming close to that bathroom door as he knew exactly what I had in mind. Now you tell me, it’s now one year later, that’s twelve months, 365 days; however you want to look at it. Hugo definitely understood the game that was being played out. He wouldn’t take the bait this time. He just turned around and went as far away as he could from the bathroom. Hugo didn’t get his bath that day. Nor did he get it that week. Luckily we had a little better weather the following week and I was able to get him outside and wash him. This is just one of the many stories that certify a dog is smarter than we think.